5G Liu Sum Yi, Poem by 5H Lam Chin Yau
Dancing lights
deep in the embrace of river gods;
burning bright,
rejoicing in the dreams of hopeful souls;
flickering eternally,
branded into our minds.
The green light at the harbour winks in kind.
"Krathong." It whispers,
softly behind.

As my kathong makes its way through the pitch black water to join its peers, my mind floods with a plethora of emotions: joy at the never before seen festivities, a sense of belonging amongst friends, an early bit of sadness at our departure in two days' time... But most prevalent of all – a sense of shame. Shame, yes, shame, at having so badly misunderstood the purpose of our trip and underestimating what I would have gained from the experience.

After hearing about the history of Phang Nga – one of the hardest hit cities in the 2004 tsunami with almost half the population decimated; home to the largest population of Burmese aborigines in Thailand, who were systematically unrecognised by the government – it'd been easy to give in to the "poverty porn": my expectation had been that we'd arrive, hand out much-needed rations to destitute people, lament the state of the ruins and return to Hong Kong, having learnt a sobering lesson about the might of nature and the powerlessness of mankind in the face of such a cruel, indifferent universe. To my utmost shame, I'd written a story of donation and salvation and cast us in the role of the protagonist.

Yet the joy and generosity of the local villagers never failed to astound me throughout our trip. At each school we went to, we were plied with little chocolate stick candies and bottles of soda by the school children, who we learnt had bought them from the tiny ramshackle tuck shop hidden behind the school block. During our breaks, while the coats of paint were drying on the wall, we got caught up in an impromptu game of tag and the unadulterated joy was like nothing we'd experience in a long, long time. While touring Khao Lak, we ran into the local ice-cream vendor and after a lengthy struggle, our mentor Vanessa graciously accepted a cup of the creamy treat from the grinning girl.

What we'd gained from the trip was far more than a tan and a dozen mosquito bites. At the sea turtle conservation centre, we'd come face-to-face with the effects of pollution when we were shown a bleach-white turtle skeleton with its beak still entangled in a plastic six-pack ring. After that, it'd seem like fitting penance for our past sins when we dragged more than 50 kilos of trash from the local beach. Yet the efforts of the locals were much more crucial to the rebuilding of their community than what we could have done in the measly few days we were there. Another of our instructors, Gay, was actually a local who'd come into contact with GVI when taking a free language lesson they organised and fallen in love with their mission.

During our village tour, there was construction scaffolding at each corner we turned. Our guide told us that some of the upturned hulls of ships that had been washed up during the tsunami were being turned into a museum commemorating the event in the hopes of attracting more visitors to boost their tourism industry. We watched the bamboo poles rise up over the stern of the ship, like, I thought, the metaphorical phoenix out of the ashes.

Corny as it may sound, the memories of the baby sea turtles falling asleep in our hands as we washed them, and the arrestingly vivid sunsets, so different from those in Hong Kong that are so often choked with smog, have wriggled into a crevice of my heart where I suspect they'll remain for quite some time. The story of Phang Nga, it turns out, is one of the resilience of humanity and the magnitude of compassion.

5D Chau Cheuk Fung, Kelvin
Ten of us went to the BEA Tower located in Kwun Tong for some first-hand experience working in a bank for a week. All of us had high expectations and in the end, the programme had indeed exceeded our expectations.

We attended lectures and sharings from staff of different departments in BEA, including financial planning, insurance business, credit card business, cyberbanking and CTMD, to name a few. Some of the lectures were particularly useful for our future development, for example, the one on high-impact presentation as the lecturer shared with us her six powerful skills in delivering a “high-impact presentation”.

The most memorable experience was surely conducting a survey about products and services of banks besides BEA by visiting different banks close to the BEA Tower. This was an eye-opening experience as we rarely go into a bank to ask questions related to its products and services. I used to think that the operation of a bank was rather mysterious, but after the SAW, I gained a lot of knowledge about the banks and the banking system in Hong Kong. 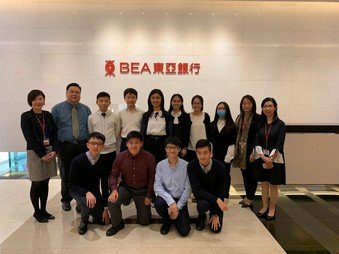