5I Liew Jia Jun
As a Form Five student living and breathing the hectic IB life, I was initially not too keen when the exchange programme was announced. I thought seven extra desks were too much for the classroom to hold, and seven extra distractions were too much for me handle. However, I regretted having these feelings after the two-day visit from students of Anglo-Chinese School (Independent) Singapore.

On 12 November, we met our buddies in the cafeteria before school started. I was assigned to look after Ryan. As we were walking up the stairs, our conversations were short, but upon reaching the classroom, I began to feel a connection as we shared a lot of similarities, such as our family culture and taste in Mandarin songs. I also found that he had recently been transferred to ACS for the IB programme and was working very hard every night, aiming to do well in his examinations and pave a better path for his future.

During class, Ryan was more than helpful when we were carrying out experiments or doing group projects. I really appreciated his effort especially during the Chinese class.  As we are taking Chinese A while they were only studying Chinese ab-initio, he had to try really hard to understand our literature texts and attempt to analyse it. This willingness to try their best was indeed something worth learning from.

The two days flew by and they had to leave for their next destination, Guilin. When the final bell rang, our classmates and I were sad to part with them.

As the janitors removed the extra desks and chairs, the room felt empty. No matter how hectic life may be, we must not miss out on any chance of learning from others, as the experience you will gain may never come your way again. 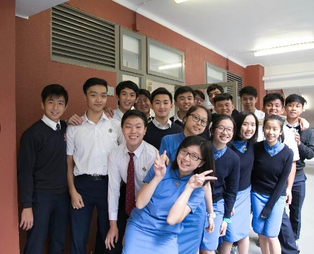