The Prince Philip Scholarship scheme was founded in 1981 by Dr David KP Li to enable talented students from Hong Kong to study at the University of Cambridge. The scheme is named in honour of the then Chancellor of the university, His Royal Highness Prince Philip, Duke of Edinburgh.

On 7 September 2022, two of our Form 6 graduates (Class of 2022) attended the Prince Philip Scholarship award ceremony. Audrey Chow (CHOW Kei Yin of 6I) has been awarded the scholarship to read Law at Trinity Hall while Heidi Sze (SZE Cheuk Hei of 6B) will be reading Land Economy at Newnham. The event was attended by the proud families of both students as well as Principal Poon and our Counselor of Further Studies Ms Christy Liang. 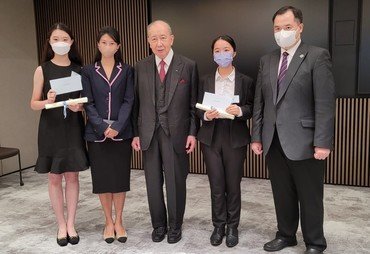